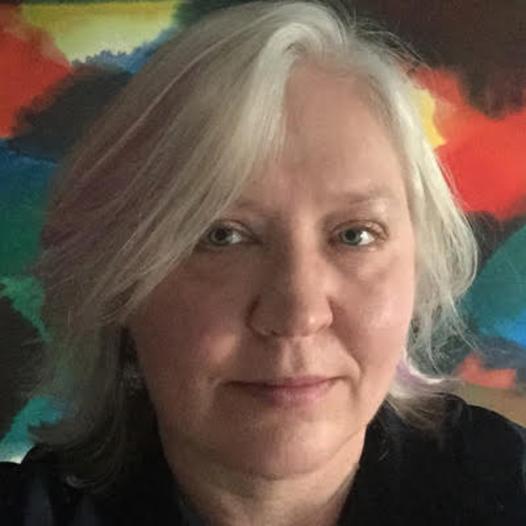 Marissa was interested in art from an early age.   She kept at it through her childhood, and it eventually led to her acceptance at the prestigious Parsons School of Design in New York City.

In New York, she met her first husband, Allan Bridge.  He ran a conceptual art project/telephone confessional called “The Apology Line”.  Allan and Marissa were avid scuba divers, and the underwater landscape was the subject matter of her first artistic success as a painter.  She had several shows, and was well on her way to a major career, when Allan was suddenly killed in a scuba diving accident in 1995.

After that great tragedy, Marissa gave up painting Underseascapes, although she continued to create artwork, and received numerous painting commissions.  In addition to helping her second husband, the writer Joe Lamport, raise his two sons, she established a well-regarded decorative painting business.  Her clients are some of the most talented interior designers and taste-makers in New York City, and she was able to further refine her sense of aesthetics in her many creative projects with them.

Marissa and Joe have a home in Long Island, NY, and at times she painted the local landscape.  One fateful day, her sister gave her a potted cyclamen as a gift, and Marissa decided to draw it.  Something shifted inside her, and it was the beginning of a new direction in her life.  She stated that when she began her devotion to flowers, she “finally crawled out of the sea and into the garden.”

Flower imagery continues to be the theme of Bridge’s work today.  It has evolved over time from a 36-painting series titled, “The Journey”, to the “Mummers” series of flowers organized in grid-like compositions, and currently to the mixed-media pieces which have branched out to include several themes.

Bridge has tapped into her love of materials in this new work, which utilizes wire, stones, seeds, beads, pearls, modeling paste, gesso, paper, and papier mache.  Some pieces allude to flower iconography, others have evolved into star imagery, utilizing the indigo base coat, which Bridge uses to begin every single piece of art she makes, as dark sky space.   Perhaps the sky is the final frontier for someone who began painting the ocean depths and moved on to the subject of landscape and flowers.